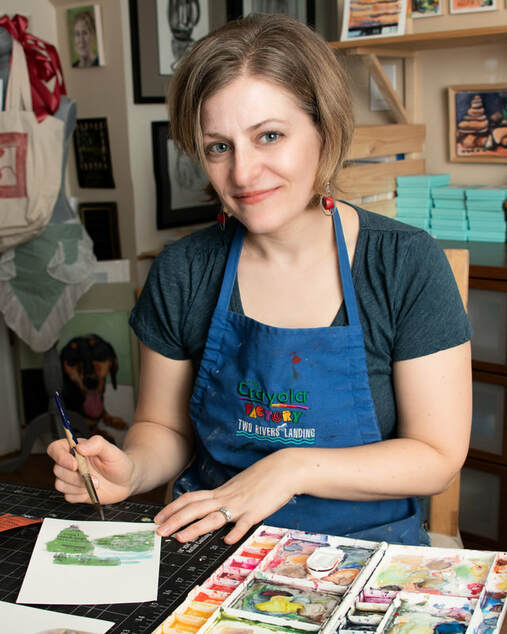 Named one of the NJ Herald’s 2009 “20 Under 40” and 2006’s “Best New Artist” by the Sussex County Arts & Heritage Council, Jennie has an extensive exhibition history and her works are part of a growing list of private collections across the country. In addition they have won entry into several exclusive exhibits including, the Visual Art Center of NJ’s International Juried Show and NYU’s Small Works at 80 East Washington Square Galleries in NYC, along with the Noyes Museum of Stockton College, the Yellowstone Art Museum, and the Montclair Museum of Art.

Jennie's works have earned her publication in the New York Times, the Village Voice, the Star Ledger, OurHouse Magazine, NJ Savvy Living, and the Sussex Journal. Both Gawker Artist and JerseyArts.com have featured the artist in online galleries. They have also garnered numerous awards, notably from Syracuse University, the Somerset Art Association, and the Sussex County Arts & Heritage Council. In January 2008, Jennie was awarded the Geraldine R. Dodge Foundation Scholarship for a  residency at Peters Valley Craft Center.

Jennie founded TraillWorks in 2005 out of her Boonton, NJ apartment. Upon relocating to Newton, NJ, the artist worked out of a small bedroom studio teaching private lessons and developing her work. In 2008 she made the leap of renting a storefront on Newton's Spring Street, expanding her studio and opening a gallery to show her work. Two years later, expanded again where she operated a private studio, designated lesson space and formal gallery. In the five years of operating a retail business, she contributed greatly to the revitalization of Newton, not only through her lessons and exhibits, but also through leading many public arts projects and events. In 2013, life took another turn; she gave birth to her second son and her family relocated to West Orange, NJ. After 8 years of exhibitions, developing a new body of work, and teaching many students, it was time to move on again. ​

Jennie grew up in Easton, Pennsylvania, and comes from a lineage of happy artists (visual, musical, and performing). She and her husband now call Durham, NC, home along with their two sons, and rescue dog, Cider.